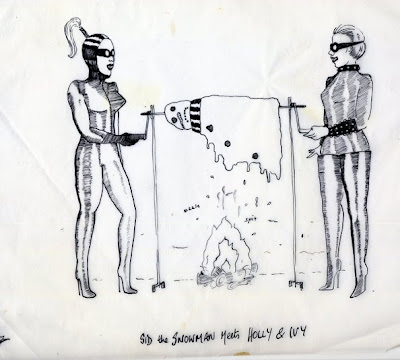 A long time ago, I worked for a lady making carpet bags ( I would like to say it was in a garret with no heating and she beat me if I didn't sew fast enough - but sadly it was Jimmy Young on the radio, all the tea you could want and lunch was included - very nice). Anyway, her husband, who was a writer and journalist, liked my cartoons and it was his idea to do a Christmas themed book inspired by my sense of humour and his lapsed Catholicism, so "Little Ellen Angel's Bumper Book of Bondage, Blasphemy and Bestiality" started to take shape - now I have to add the title was his idea and the contents may have not exactly lived up to the title (honest), but he did actually take it to his publisher! Gee, I wish I'd been there, but said publisher said he was awash with Dead Cats at the moment... and I don't blame him for using that excuse.
However I did put a hell of a lot of work into this and ended up with a whole load of cartoons that have sat in a box for years and years, and some of these have formed the basis of Rubberfish characters. These two appeared several times in the 'book' and were called Holly and Ivy, who got up to lots of general Yuletide naughtiness and are definitely the inspiration for Ms Swat.
Labels: Holly and Ivy Jimmy Young Simon Gandolfi Yardby Bags

Ms Swat in Pardon My Aorta